I've often heard that developers in the open source community can be a bit harsh, indeed just 3 days ago the host and guest one of my favorite podcasts [1] touched briefly on that sentiment. By the way, shouts outs to Jeff and Erika, your podcast is great, very informative and a pleasure to listen to. Anyhow, no less that 36 hours later, I am bearing witness to that harshness firsthand having received feedback about a recent update to NIM (Node Inspector Manager), which is a Node.js developer tool that I wrote. Many have found NIM to be extremely useful and I have received much positive feedback about it... UNTIL today that is.

Before I get deep into things I will briefly explain again that I immediately made available the old version 0.11.0 on the Chrome Web Store in consideration of those who were displeased with the update from version 0.11.0 to 0.12.0. And as has always been the case this project is open source and hosted on GitHub. In my opinion that fact alone should be enough to ease the concerns of most, even more so a developer (the target audience for this Chrome extension) that understands what the code is doing, and in fact, can see every single line of code that is being run. Even without the source code being hosted on GitHub, anyone with a debugger and a tool like... um, NIM (see how I did that, lol) could find out what is going on under the covers of most any Chrome extension, certainly this one. 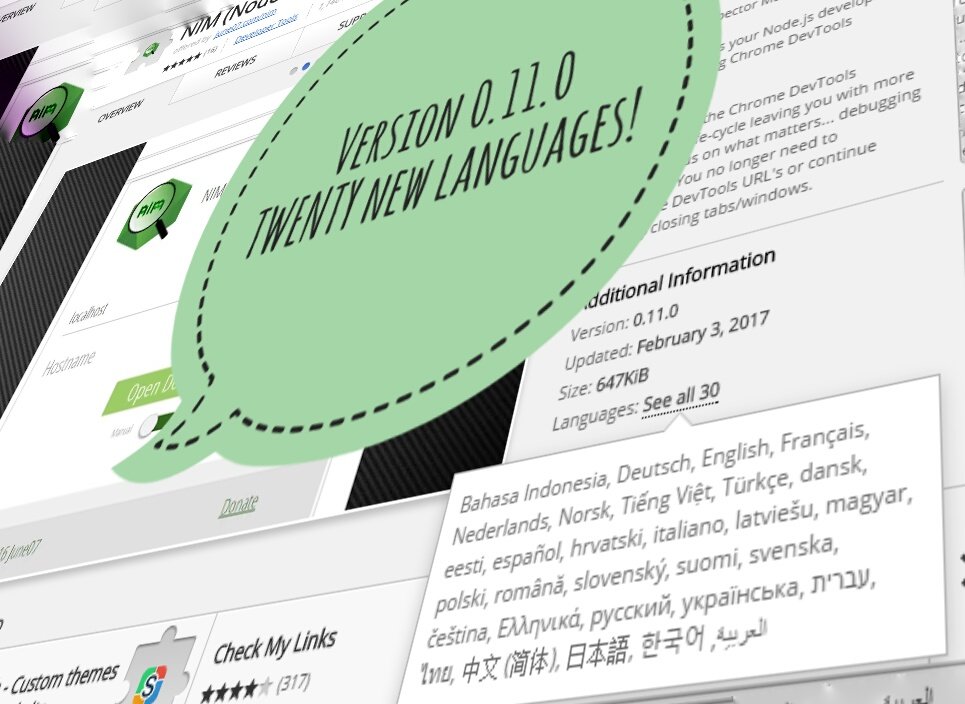 So late last night the excitement fueled me, you know the elated feeling you get when you've written some piece of code that other people find useful?! I think other developers can identify with the feeling. I've certainly heard others speak of it before. That joyful feeling kept me banging away at my keyboard because I wanted to get the next version of NIM pushed to the Web Store. I decided earlier in the evening to stash a large number of changes I had made but that were not yet complete (adding a tabbed interface among them... per user's asking for such a feature) and instead focus on a smaller task, one I could get completed before the night was up. And so I did! Code tested and working, changelog updated, code pushed, minor associated tasks here and there... check, check, check, and check. I could now rest peacefully with the comforting anticipation of waking the next morning to reap the fruits of my labor. To see the user base grow and maybe even to see a few more kind words and a G+1 or 5 more stars thrown my way! Oh, and of course the most important event I had to look forward to on Friday (besides the obvious greatness... the fact that IT WAS FRIDAY), was my daughter's Chinese New Year celebration at her dual immersion Mandarin school. Alas, I woke to a reality markedly different. Quite surprisingly at least to me... there were several comments about the changes pushed the night prior, MOST of them very thoughtfully composed yet none which gave me that good feeling inside. So immediately, the very first thing I did... even before brushing my teeth, drinking my first cup of coffee, and taking my shower (in that order)... I responded.

First off, here is what (or maybe I should say who if we are taking things literally) I saw staring back at me from my screen this morning:

Funny thing is that I can't at the moment find the really negative post (actually would go so far as to say RUDE post) as I assume it was removed by either the user himself or by Google moderators!? I did, however, copy/paste the text of the comment before it was removed, hence the title of this blog post. And I believe a screenshot may be on my desktop which I will likely add if I find it.

But it was to Dennis, Spencer, and Axel whom I felt it very important to give an explanation. Certainly, these guys, these developers, essentially these users/customers were people who were a concern of mine and who I felt deserved to have their questions answered... and hopefully concerns addressed.

And here is my response:

"Please don't be alarmed. Your concern however is understandable. And if you prefer I can write up a blog post explaining how to build the extension from source. That is something I may actually do regardless, as I'm sure others may be concerned as well.

At times the GitHub version might lag behind the Web Store version or vice versa.

Now let me explain in more detail the reason for the warning. Or actually point you to the best explanation: https://developer.chrome.com/extensions/declare_permissions#background

So the only change in permission that was made from version 0.11.0 to 0.12.0 can be found in the manifest file at this commit:

where the "identity", "identity.email" permissions were added. This was required and because of adding the ability to track which users are running which version of the app. So when upgrades occur I have better in-site into the progress of new version coverage as Google's current stats capabilities aren't that great.

Also understand that no information will be shared with any third parties and should that change a notice of such will be given.

If you have any additional questions or concerns please don't hesitate to let me know.

AND if you have not already, it would be very helpful to receive positive feedback via a 5-star review and/or G+1. Both take only a minute as the links are right on the app itself now.

Thank you very much for your support."

And in the famous words of my dear sister (who unlike myself is a great writer! Read her book Tom of all Trades at the Amazon Kindle Store), "I'm bushed!" To that end I say, Thank you for reading, good night, I bid you peace, and:

Part of a Reddit thread which was started about this topic: